For decades, tights have been an article that can be found in every wardrobe of a woman. But why should there be such a product only for women, after all it is part of the equality of men and women to launch a similar product for men on the market. However, most creatures in the male guild will initially deny this. There is too much pride in standing in front of one’s colleagues wearing pantyhose for men. The trend seems to have continued in recent years, as more and more men took the opportunity to exchange their uncomfortable long underwear for pantyhose when first pantyhose for men were sold.

But why has demand for men increased so strongly in recent years? Imagine being on a skiing holiday. The snow reaches over the hollows of the knees and the winter makes the legs numb with its relentless cold. That brings us to the first point that makes tights very attractive for men – winter sports. Although we were well prepared for the winter with the standard long underpants, the wearing comfort was anything but outstanding due to the thick material and the unshaped seams.

This is a bit different with good pantyhose for men, because the thin and soft material provides a much more pleasant feeling than common long underpants.

Not only that, but despite the thin material the product warms better than you might think.

a popular compression model – the pantyhose for men from Jomi Compression 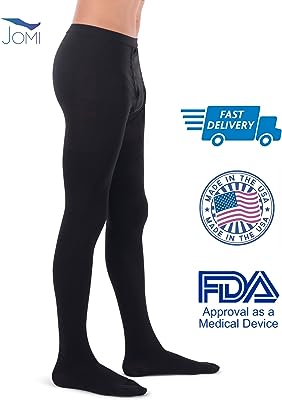 An example for this is the Jomi Compression pantyhose. In addition to an absolutely acceptable price for the model, it has many other advantages. A soft knit ensures a good wearing comfort.

The basic characteristics of Jomi Compression tights are elasticity and warmth and of course compression. This model is also considered to be particularly comfortable. The shape adapts perfectly to you and even in the upper leg area, where men are usually well muscled, you don’t feel that the product is too tight. The feet are also taken into account here, which is usually not the case with normal long underpants. This keeps your feet warm, even during an extended winter walk through the snow.

Another pleasant side aspect is the opening available on the Jomi Compression model. This makes it easier for men to go to the toilet and not just a matter of minutes due to the additional piece of clothing. The thermo function, which provides warmth, is an advantage that most men who have switched to men’s tights would not want to do without anymore.

You can find this model here on amazon.com!

Must men’s tights also be male?

But where does the idea of introducing this everyday consumer product come from? Originally, pantyhose was only intended for women, because men also liked it visually when they saw a woman with beautiful pantyhose. A typical situation in the transition from summer to autumn is, for example, when the woman wants to wear a skirt, but it is actually already too cold outside.

So the woman could fall back on the proven pantyhose without having to freeze her legs. Also the optical attraction of the tender, often transparent stockings was not to be neglected. And so it came to pass that at some point the man found the object for himself. And one often hears that most male representatives do not want to do without men’s tights after use. Although the first models for men came onto the market as early as the 1960s, they were anything but welcomed by the target group at the time.

There are also delicate models for men that do not resemble long underpants!

In the meantime, this image has fundamentally changed in our society, which in any case tends more and more towards openness, acceptance and tolerance. Almost in any size, strength, shape and colour you can find the products for the men’s world. This ensures that the entire target group can be reached and enthused with great certainty. One could say that the fear of the malice of the friends has given way in the meantime, since the functionality and quality is meanwhile so high that we can speak with the pantyhose for the man of an accepted article of daily use.

Cold feet don’t really have to be anymore and can be fought cheaply and effectively. In the past, it was even the case that men who did not rely on such a product at the time were not able to get their hands on it.

In general, men’s tights have been around since the 60s. They are also becoming more and more popular with the male guild in society. Especially in the field of sports they are becoming more and more popular. A new trend, which has not been able to win so many friends so far, are sheer tights for men. The difference lies in the fact that the normal pantyhose can be purchased in black and opaque, the sheer pantyhose for men, on the other hand, rather reminds of the classic women’s pantyhose, which is sheer and made for beautify women’s legs. The number of men who ask for such a product seems to be increasing, otherwise there would not be this wide range of models for men, whereby it would also be possible to achieve the same effect with a fine sheer pantyhose, which is actually for women.

some good sheer pantyhose for men you can try!

One could argue that men’s tights have become a normal piece of clothing. So there is hardly a reason why you shouldn’t wear this variant as a man anymore, if it were not for the fear of something new. But what is this model suitable for and for what occasions can it be worn? If, for example, you have to walk to get to work and freeze in winter, the pantyhose for men is a great advantage. It keeps you warm on the way to work, but when you get warm, you don’t sweat too much, so you might get an unpleasant feeling. If the transparent version should go a little too far for you, you can still fall back on the numerous models in black, which are however rather unsuitable for the summer.

But the big task would still be to make the pantyhose for men actually so suitable for everyday life that you don’t have to turn red as a man when your colleague recognizes which garment you are wearing on your legs. Even the price, which is usually higher than the models of women’s fine pantyhose, doesn’t make this undertaking any easier. So why buy and try? Well, the much more pleasant feeling has already convinced many people to buy pantyhose as a man. Only when you have actually tried it out will you really know how you are received in public. Is it even noticeable? Do you even get a positive response? None of this can be said before you actually act. So there is only one piece of advice: try it out and decide for yourself whether men’s pantyhose will get a permanent place in the wardrobe or not. There is no blanket answer to this question.

pantyhose for men – best tights for males
Scroll to top